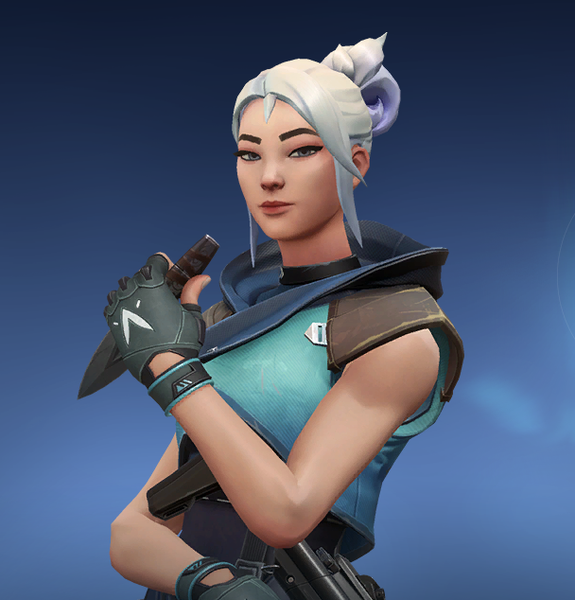 This agent comes in from South Korea. Jett is known for her agility and speedy fighting style. As a duelist, Jett is able to rush into battle and take risks that would usually have bad consequences, but with Jett’s speed and evasive ways, she is able to fight her way to victory.

“Updraft” is Jett’s first ability. This ability allows Jett to be propelled high into the air, enabling her to land on high platforms and surfaces that others would never be able to. Jett can also use this ability to soar above the battlefield and see the whole battle from a birds-eye view. This gives her the advantage of being able to see the whole picture and figure out what the opposing team’s strategy is.

“Tailwind” is Jett’s second ability. Whenever Tailwind is activated as Jett is moving, she is propelled in the direction of her movement. If standing still, Jett will get pushed forward. This is a great ability to have when dodging attacks and trying to make a quick getaway. This ability is also good for catching the enemy off guard, and reappearing elsewhere before they even figure out what hit them.

Jett’s third ability is “Cloudburst.” With this ability, Jett can throw a projectile that expands upon landing and forms into a brief vision-blocking cloud of smoke and wind. These smokes impair the vision of enemies and make it easier to trap unsuspecting opponents in the bubbles of wind. These clouds also allow for Jett to make a sneaky entrance into different areas because the wind obscures her movements.

Jett’s ultimate ability is called “Blade Storm.” This ability enables Jett to equip five highly accurate flying daggers. On every throw, a single knife propels towards the enemy. With every kill caused by the knives, the number of knives remaining in Jett’s possession will recharge. These daggers are extremely useful to have if your enemy’s weapon is more powerful than your own or if you are not rich enough to purchase weapons during the buy phase at the beginning of a round.

Jett is used quite often and is very commonly seen on every team, because her unique fighting style and special abilities make her a great candidate to try if you desire an agent who is quick on their toes and possesses a wealth of fighting prowess.