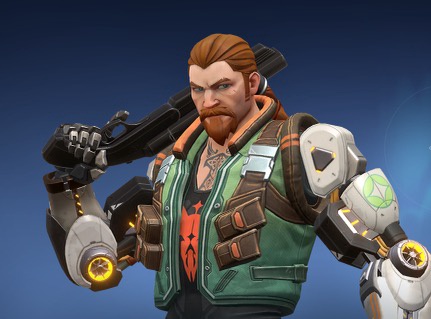 Coming from Sweden is the next agent: Breach. Breach is known for his blasts of power and the path of destruction and damage he leaves in his wake. He is considered an initiator, so Breach is good for pushing enemies out of planting sites and keeping them out of the way.

“Flashpoint” is Breach’s first ability. This ability allows Breach to fire a blinding charge anywhere, even through walls. Once the charge has exploded, it will blind all players who see it, even his own teammates, so be careful about the placement of the flash. This is a good skill to have because it gives Breach’s team an advantage while the flashed players fire at no particular target.

Breach can also equip “Fault Line.” With this ability, he is able to release a seismic blast, which can be adjusted for length and width. Once the quake has been released, any players who are caught in the zone are left concussed, meaning their vision is blurry and they see double, maybe triple, of everything. This seismic blast is a great way to disorient opponents and catch them off guard.

“Aftershock” is Breach’s third ability. With this ability equipped, Breach can fire a fusion charge anywhere in sight, including through the walls. Once the charge has finished winding up, the charge will burst in a cocoon of power. Anyone caught in the area of the blast will be damaged immensely, and most likely killed by the power behind the charge.

Breach’s ultimate ability is “Rolling Thunder.” Rolling Thunder is another seismic charge. This charge sends out a huge quake throughout a large area of territory, in tons of separate stages. The quake will daze anyone in the area and throw them off course. The concussion caused by this charge is more damaging and blurry than that of “Fault Line.”

Breach is a very powerful and influential player to have on your team. Although, Breach is oftentimes underestimated and rarely used. Breach’s abilities are very beneficial to have though. The charges he can send out are very useful in the sense that they can impair the vision of opposing players and detain enemies.