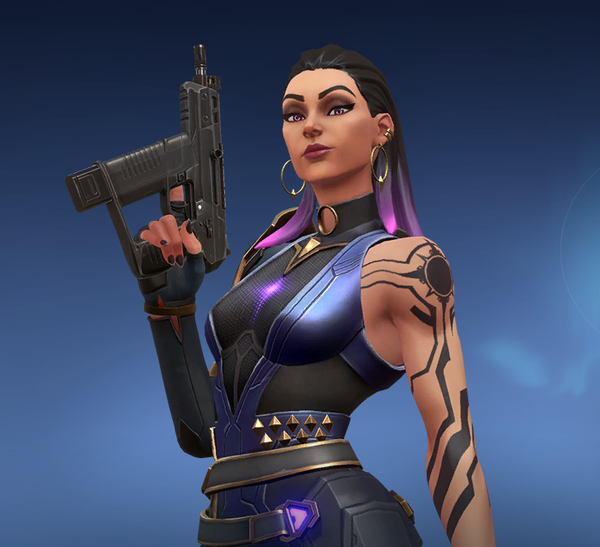 This agent, Reyna, is a duelist, meaning that her skills are catered towards charging into enemy territory and taking over sites. Born in Mexico, Reyna’s main powers are based on shadow and soul energy.

Reyna’s first ability is called “Devour”. Once an enemy player is taken out of commission, Reyna is able to see any “soul orbs” left behind. These purple orbs last three seconds, and Reyna is able to consume them in order to heal herself; this allows Reyna to heal herself to almost full strength, and sometimes even heal over one hundred health. If overhealed, Reyna can take more damage, but the number of health points above one hundred will deplete over time.

“Dismiss” is Reyna’s next ability, and it also deals with the soul orbs left behind from Reyna’s victims. When using this ability, Reyna can take in a soul orb and become intangible for a short duration of time; she will be in her “shadow form.” Reyna will be hard to kill in this state, because she is able to absorb more damage when in “Dismiss.” But, she is unable to be harmed when in this mode, which is extremely helpful to have when being chased down by enemy players.

“Leer” is Reyna’s third ability. “Leer” enables Reyna to throw a smoky cloud eye into the sky. Once activated, these eyes will expand and nearsight all enemies in the area, basically meaning that the vision of the players will be distorted, making it harder to see what is going on. Leer is a god ability to have in case Reyna needs to stage an ambush or is outnumbered by opponents.

Finally, Reyna’s ultimate ability is “Empress.” After activation, “Empress” allows Reyna to enter a frenzy of high-speed attacks and reloads. After every kill, the duration of time that Reyna is in this frenzy will reset itself. Also, when in “Empress,” soul orbs are automatically consumed and used to heal. And, when “Empress” is active, if “Dismiss” is also used, Reyna won’t just be intangible, but she will also gain invisibility, making it incredibly hard to be spotted.

Reyna is a very easy agent to use, mostly because of her ability to heal herself over and over again. Although, Reyna can only heal herself, and not her teammates. You will see that almost every team has a Reyna, as she is easy to control and play, especially if you’re a new player hoping to stay alive.