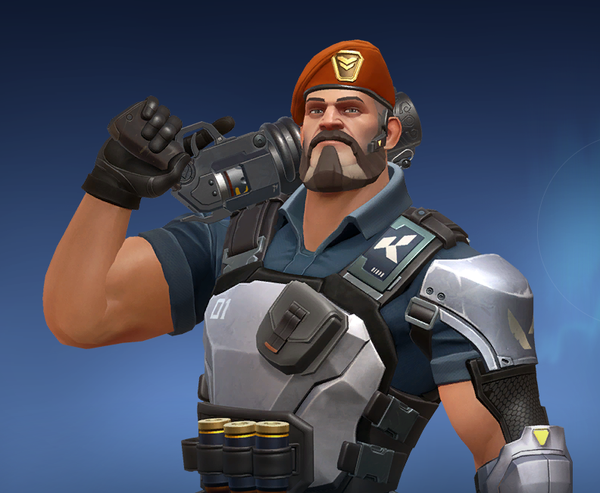 Brimstone is the first character you will see when playing Valorant, because he is the head of the “agents,” or characters. Brimstone is categorized as a controller, meaning that he has
abilities that can be used to shape the battlefield by splitting and obscuring parts of it.

Brimstone’s character comes from the USA, so his abilities and fighting style matches that of his country. He has an abundance of orbital arsenal weapons, and he is able to use them accurately and precisely from a distance. Brimstone’s abilities are all based off of fire, so many of his powers will launch fire or lava at opponents.

Brimstone’s first ability is called “Incendiary.” This power allows Brimstone to equip an incendiary grenade into a launcher and shoot it wherever he pleases. When this grenade lands on the floor, it will automatically detonate, leaving behind a “fire zone.” Any players caught in the fire zone will gain damage, and if a player stays in the zone for a prolonged period of time, they can die. However, this fire zone also affects players of your own team, so if Brimstone launches the grenade at his allies, they will also take damage.

“Sky Smoke” is Brimstone’s second ability. This power allows him to look at a map of the sites and choose locations to set off smoke clouds. These smoke clouds last a long time, and they block the vision of all players within the radius of the cloud. These are best for ambushing; waiting inside the smoke clouds for an unsuspecting enemy, and then get them while they aren’t able to see what’s going on.

The next ability on Brimstone’s list is “Stim Beacon.” A stim beacon is a small triangular device that Brimstone can equip and toss into an area. When the stim beacon lands, it will activate a force field, and any ally players within the force field will be granted rapid fire, which allows them to shoot their weapons at a much faster speed.

Brimstone’s last and ultimate ability is “Orbital Strike.” He can look at a map of the sites and decide where to place his strike. Once the location is decided, an orbital strike laser will form
over the area, capable of dealing very high damage, and even death, to all players in the area of the laser. The laser does take a little time to activate, and players in the laser area will be able to see red lines around their vision, so enemies will be able to tell that an orbital strike is coming.

Brimstone is a very reliable player if your team wants to try a more tactical strategy because he is able to break up sites and deter enemies.