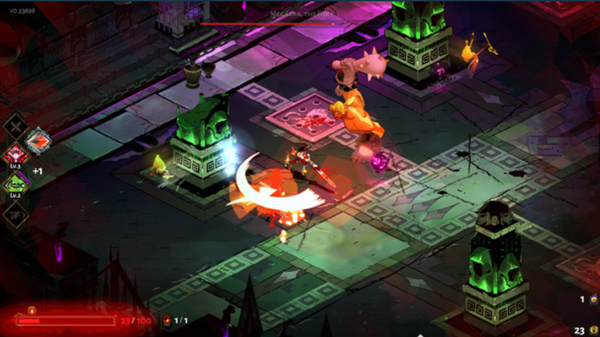 Hades is a combat-style game that incorporates concepts of Greek mythology with a storytelling adventure. All of the graphics are comic book/graphic novel style.

Along the way, you will meet a few of the Olympians, such as Zeus, Athena, and Poseidon, who will provide you with mythic powers and weapons. Your choice of which god you meet will lead you to enhance certain abilities.

The fun thing about this game is that there are thousands of unique storylines. Depending on who you choose to interact with and which powers and weapons you choose to accept, your story will change and reflect the choices made.

As you venture through the Underworld, you will undoubtedly meet monsters who want to halt your progress. You must use your newfound abilities and weapons to obliterate them in order to continue with your quest.

As the journey progresses, there will be short segways that interrupt gameplay in which the backstory and problems of the Olympian family is debuted. These moments are important, as they can clue you in on certain battle tactics and give you insights for how to better deal with the gods.

Everything in Hades is interactive, from the landscape itself to the people you talk to. Building relationships is key to finding a way out of the Underworld. The better your relationships with the Olympians, the more willing they’ll be to help you.

And of course, you’re trying to escape the god of the Underworld himself: Hades. When you’ve gone through friend and foe alike, you’ll have to beat Hades. Use your newly mastered tricks and the skills you’ve picked up on the way to defeat the boss and eventually make it out of the Underworld.

Hades is a particularly fun game because not only does it involve combat and fighting tactics, but it also requires thinking and problem-solving. And for those of you Greek mythology lovers, this is definitely a good game to add to your collection.