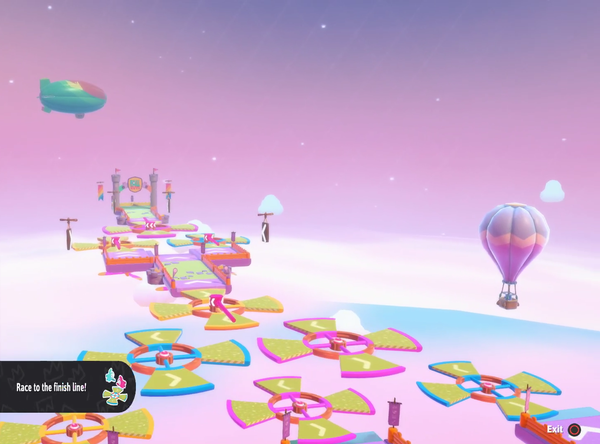 Fall Guys: Ultimate Knockout is like the video game version of Mission Impossible and Wipeout combined into a cartoon, animated, and hilariously aggressive video game. In this game, up to 60 players battle it out in an obstacle course like maze, trying to be the first few to make it on to the next round.

The first step to beating fifty-nine other competitors is getting dressed up in a snazzy outfit. Characters can be customized and outfitted in hundreds of outfits. Obviously, the better you look the better you perform, so have fun creating your character at the beginning of every round!

As soon as there are enough players queued up, all players will be lined up at the starting line of a randomly selected map. There are tons of maps, so if you’re new to the game, it might be a while before you see two of the same map.

Throughout the course are obstacles, whether it be a swinging rod, moving platforms, or even the shoving of the other competitors. At the beginning of every round, there will be a number displayed on the side of the screen. The goal is to make it to the finish line of the obstacle course and be one of those top people. For example, if the number is 15, you would need to finish the course in the top 15 to move onto the next round. This process repeats until there is only one player left.

When in the middle of the course, if a player falls off the platforms or gets shoved off the side, they will respawn at the nearest checkpoint. This allows players to still stay in the game and have a decent chance at advancing to the next round.

Occasionally throughout the match, to give players a break from the competitiveness and free-for-all attitude, the game will shift gameplay and promote games that require cooperation. In these mini-games, teams must work together to either complete a task quicker than or beat the other teams in a competition. In these cooperation games, the losing team members all get eliminated.

Even though the game can be frustrating at times, especially if you’re consistently getting knocked off the platforms, it can be really fun to play as a way of changing the pace from a lot of the realistic, violent, survival games that have been gaining popularity.