TBR: Delilah Dirk and the Pillars of Hercules 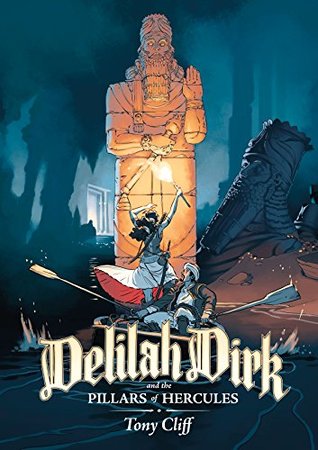 For some of us, reading just isn’t our thing. However, graphic novels can make reading a lot more fun and entertaining. And if you’re looking for a good graphic novel, you should definitely check out the Delilah Dirk series.

There are three Delilah Dirk novels, The Turkish Lieutenant, The King’s Shilling, and The Pillars of Hercules. In all three installments, a girl named Delilah Dirk embarks on dangerous but exciting adventures to uncover some sort of secret.

Specifically, in Delilah Dirk and the Pillars of Hercules, Delilah Dirk uncovers an ancient relic that might be a clue to uncover the location of the legendary long lost third pillar of Hercules. This pillar, which is actually an ancient site filled with treasure and knowledge, has been sought out forever, and its discovery would be the ultimate breakthrough for archaeologists.

The clue, a disk of some sort, leads Delilah to an island, where she meets a comrade, who will accompany her and her “sidekick” on her adventures. In order to do this, Delilah crashes a party and gets caught. But Delilah escapes, and alongside her new comrades, she rides off, and eventually they discover a cave.

Inside this cave, Delilah uncovers tons of treasure and new clues. She finds another piece of the disk, and she finds that the walls of the cave are actually engraved with directions to the third pillar of Hercules.

These clues seem to lead the crew to the middle of a desert. They investigate, and after a long time of fruitless searching, they stumble upon a hidden compartment, which opens using the disk. Here they find more evidence and clues about the pillar’s existence.

After translating the writing and solving a few riddles, Delilah and friends manage to find the third pillar of Hercules, which turns out is hidden within an archaeological masterpiece of a city. Everything seems to be going quite nicely, except for the fact that Delilah’s arch nemesis seems to be on her tail and one of her comrades is plotting to stab her in the back.

Even though it’s a graphic novel, the plot is very well established and engaging, Everything reads just like a normal book, except that it’s a graphic novel. The suspense and excitement is definitely worth it. I highly recommend this book, and I’m sure you won’t regret reading. It’s perfect for a short, quick but good read.