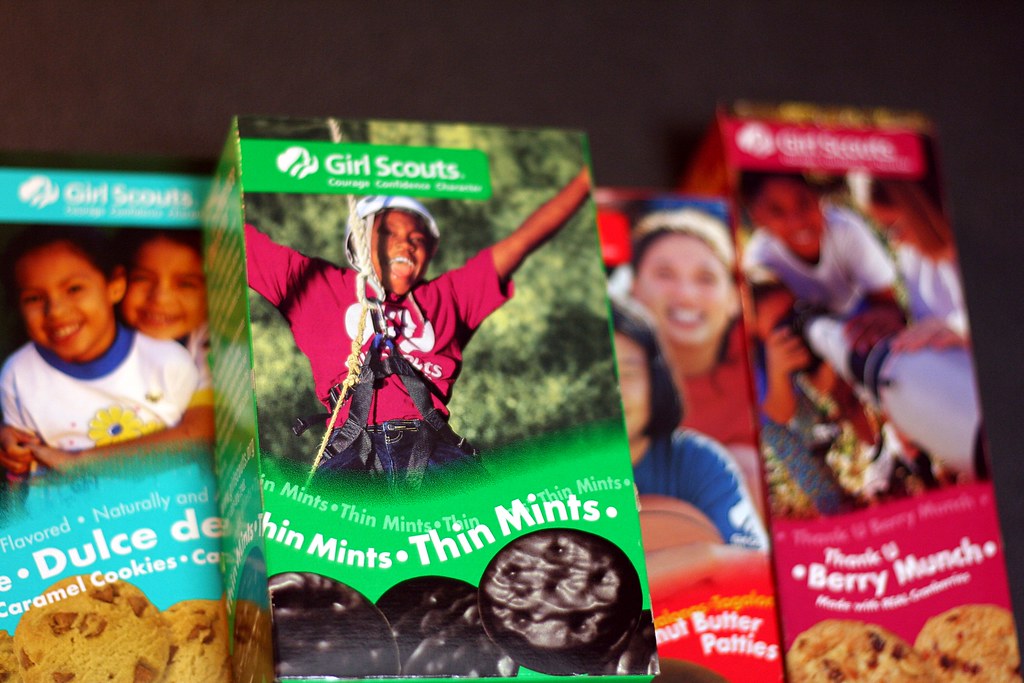 Thin Mints are perhaps the most well known cookie Girl Scouts have ever sold. And it’s also a fan favorite. Thin Mints made their official debut as a Girl Scout cookie in 1974. Thin mints are round, chocolate covered cookies. The insides of the cookies used to be a white, chewy mint patty, but since the bakery decided to go vegan during the 2017-2018 cookie season, the insides have since become a darker, biscuit-like cookie.

Trefoils are a staple Girl Scout cookie. They were introduced in 1974, and have continued to be in every cookie sale since. Trefoils are buttery shortbread cookies with the Girl Scout logo stamped on them. They are a classic, go to cookie that still sells out today.

Do-si-dos are a crucial addition to the peanut butter family of Girl Scout cookies. They were first introduced in 1974, and have continued to be a consistent cookie in sales. Do-si-dos are sandwich cookies, with a filling between the two cookies. The two outside cookies are oatmeal cookies, and on the inside is peanut butter,

These cookies made their debut in 1976, and have been thriving ever since. These cookies also belong in the peanut butter family. Tagalongs are made by covering a flaky cookie in peanut butter and then coating the whole thing in chocolate.

In 1974, the Van’chos were introduced. They were discontinued in 1983, but while they lasted, they were a fan favorite. Van’chos came in two flavors: chocolate and vanilla. The sandwich cookies were either chocolate or vanilla and both flavors had a vanilla cream center.

Forget-Me-Nots came out in 1979, but were discontinued in 1981. These cookies were slightly controversial; they were granola oat and raisin cookies. The controversy over oatmeal raisin cookies carried over to Forget-Me-Nots, and consumers either loved them or stayed far away from them.

Chocolate Chunk cookies began their debut in 1979 and were taken away in 1981. These were classic chocolate chip cookies, and apparently, the best way to eat them was to microwave them in order to have melty chocolate chips and a soft cookie.

To commemorate fifty years of Girl Scouting, the 1983-1984 cookie sale seasons consisted of Medallions. These limited edition cookies were thin shortbreads dipped in either pecan-praline or fudge.

The 1984-1985 cookie seasons were the only season to include Juliettes. Named after the founder of Girl Scouts, these were daisy shaped shortbread cookies dipped with either pecan-praline or lemon coating.

These cookies lasted from 1985-1987. Pecan Shortees were shortbread cookies with pecan chunks baked into them. They were crunchy, flaky and tender.

In an effort to make a healthier cookie option, Country Hearth Chocolate Chips were introduced. They made their debut in 1988 and stopped selling in 1990. Country Hearths were oatmeal chocolate chocolate chip cookies made with honey. These cookies were lower in fat, sugar, salt, sodium, calories and cholesterol.

Cabana Cremes were only available for the 1989 cookie season. These sandwich cookies came in two flavors. For both favors, the cookies were vanilla, but the cream center was either lemon or vanilla flavored.

Chalet Cremes were sold from 1990 to 1995. These cookies were sandwich cookies that had pictures of the “Our Chalet” Girl Scout International World Center in Switzerland on each cookie. These sandwich cookies came with sorted creme centers, either lemon or vanilla flavored. In 1995-1997, a new rendition of these cookies were released, and they claimed to have 30% less fat than the original. These cookies started out rectangular, but in 2009, they became round.

From 1991-1993, Golden Nut Clusters were sold. These cookies resembled nuggets. Each cookie was topped with a heaping of caramel and pecan, and then the whole thing was dipped in maple coating.

In 1997 and 1998, the first ever sugar free cookies were introduced. Sugar Free Chalet Cremes were naturally flavored lemon creme cookies.

Le’Chips were brought to cookie sales in 1996, but were discontinued in 1997. Le’Chips were basic chocolate chip cookies but with hazelnuts mixed in and the cookie bottom was coated in fudge.

In 2004, Aloha Chips came into play. They were discontinued in 2004, but they were modeled after the distinct flavors of Hawaii. These cookies had macadamia nuts and white fudge chips mixed into them.

Ole Oles were first introduced in 2001, but were soon discontinued in 2003. Ole Oles were vanilla cookies with pecans and coconuts. The whole cookie was coated in powdered sugar, and they were even reduced fat.

Lemon Coolers were put up for sale from 2003 to 2006. These vanilla cookies were filled with a lemon filling and lemon chips, and then covered in powdered sugar. Lemon Coolers were the predecessors of the infamous Savannah Smiles.

The Cafe Cookie first began selling in 2005, and was discontinued in 2007. These cookies were made to dip in warm beverages, thus the “cafe” cookie. Cafe Cookies were caramelized with brown sugar and a hint of cinnamon spice.

Another version of the Chalet Cremes came out in 2007 and stopped selling in 2011. This time, they were branded as Lemon Chalet Cremes. The new sandwich cookies were dusted with cinnamon-ginger spice, and the filling became a lemon creme.

Also in 2008, Dulce De Leches were introduced. These cookies were inspired by the classic Latin American treat, so they consisted of tons of milk chocolate, caramel chips, and stripes of caramel. However, these cookies were discontinued in 2014.

Thank You Berry Munch cookies came out in 2009 and stopped selling in 2014. These cookies were loaded with toppings, including cranberries, white fudge chips, and rice crisps.

As mentioned earlier, Savannah Smiles were very similar to Lemon Coolers. Savannah Smiles came out in 2011 and were discontinued very recently in 2019. Savannah Smiles are lemon flavored wedge cookies covered in powdered sugar. These cookies are named after Savannah, Georgia, where Girl Scouts first began.

Toffee-Tastics first came out in 2014, and have continued to be a part of cookie sales since. These cookies are the first to be gluten free. Toffee-Tastics are buttery cookies packed with crunchy toffee bits.

Very recently in 2020, Lemon Ups were brought in to replace Savannah Smiles. Lemon Ups are crispy lemon cookies, and each cookie is engraved with a special inspirational message. There are eight different customized messages.

2021 cookie sales are coming up soon, so if any of the cookies that haven’t been discontinued interest you, make sure to flag down any Girl Scouts in your neighbourhood to try them out. Happy cookie tasting!

To learn more about the History of the Girl Scouts, CLICK HERE!