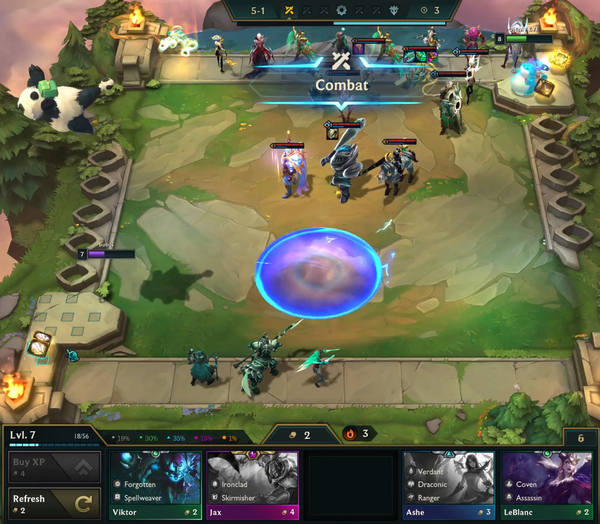 Teamfight Tactics, also known by TFT, is another multi-player competitive video game, with the ultimate goal being to come out on top and claim first place.

The end goal of the game is to be the last one standing out of an eight player free-for-all.
Throughout the game, players collect resources and build a team of units with trademark
strengths, weaknesses, and abilities.

To start the game, all players begin on a carousel, which spins around many different units with basic items. After the spinning has stopped, players will draft the first unit of their team by walking up to and touching the desired one.

Players are randomly matched with other teams and must fight each other to get to the top. The losing team takes damage. After each match, players and teams are ranked based on
performance. Carousel rounds will continue to happen periodically throughout the game in
between matches, but instead of simultaneously choosing units, players can choose their line
up in order from last to first place.

The first battles to take place are against bot-controlled minions to help players get warmed up. Using the first piece and item from the carousel, players will engage in combat with their
opponent. Throughout the match, players may notice that their characters have charged
abilities, which can be deployed to cause the enemy more damage. Aside from carousel rounds, players can also gain items through combat, which comes about whenever an opponent is taken out.

After the first few rounds of battling bots, players can begin to make more complicated
decisions. The first decision is which unit to take onto the team. All players in the game will be drawing units from a shared pool.

For beginners, the core principle most people build their teams around include synergy, which
can be found in two types: class and origin, which all units have some quantity of. The higher
the synergy, the better the units work together and the better their combat will be.

As you continue fighting your way through the other teams, more options for units will open up, giving you better odds. For all rounds after the first one, it will be a battle against another one of the eight players in the match. The goal is to defeat the other team by a large margin, which increases the amount of damage they will take. The game continues until all but the top three teams have taken maximum damage, and the last remaining three teams are considered to have made podium positions.

Teamfight Tactics can definitely be a little confusing at first, especially if you’re diving into it
headfirst with no prior experience, but it’s a game where you learn as you go, gaining more
experience and wisdom as your knowledge on the gameplay expands with time.