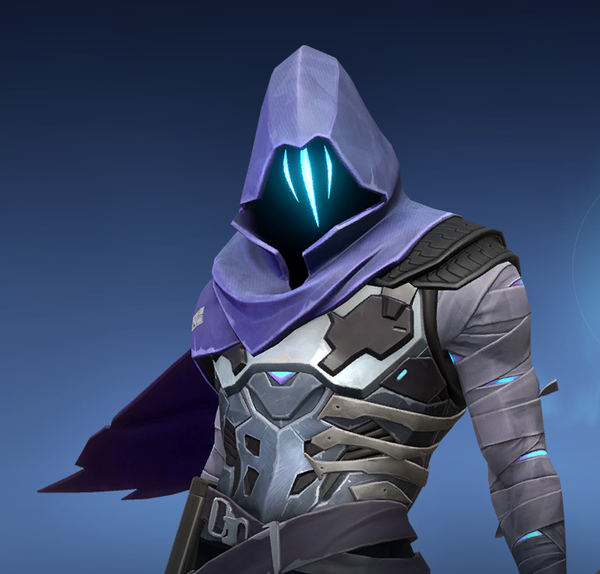 Omen represents nothing more than a phantom of a memory. His abilities are based around shadows and whispers. Omen is a controller, so his abilities allow him to shape the battlefield however he pleases, making it easier to control territory and form organized attacks against the rivaling team.

Omen’s first ability is “Paranoia.” Omen can fire a projectile made from shadows in a forward direction, and anyone hit by the projectile will have their vision range reduced. This projectile may be fired through walls. The people hit by the flying shadows are unable to see anything but blue shadows and smoke, making them vulnerable to attacks and unable to defend themselves due to their inability to see.

“Dark Cover” is Omen’s second ability. Omen is able to equip a shadow orb and throw it to a marked location. Once activated, the orb will expand to form a long-lasting sphere of shadows that blocks vision. The smoke obscures vision and allows Omen to isolate areas of the map, making it easier to ambush opponents and catch them out of the blue.

“Shouded Step” is Omen’s third ability. This ability allows Omen to mark a certain location within the allotted range. After a brief channel, Omen will be able to teleport to that location. This teleportation is especially useful to make a quick getaway or to trick your enemies by suddenly disappearing and reappearing right behind them. Shrouded Step is a great way to gain the upper hand on a victim.

Omen’s ultimate ability is called “From the Shadows.” Once this ability is activated, Omen is able to select a spot anywhere on the map. Omen will begin teleporting to the chosen location and while teleporting, Omen will be seen by other players as a shadow of a ghost, and can be hit in this shade form. If hit in the middle of teleporting, the teleportation will be cancelled and Omen will remain where he is. But, if used in a good place, Omen can make some really good plays by showing up unnoticed in the middle of enemy grounds.

Omen’s powers are all about shadows and whispers, which he uses to his advantage to create a dramatic effect. Omen is really good to use if you’re looking for a player that can move sites quickly and create distractions in order to buy you comrades more time and space.